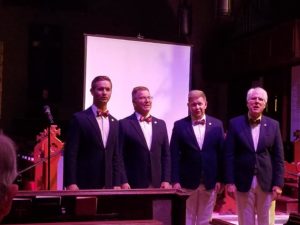 On Saturday, October 26th, St. Stephen’s Episcopal Cathedral began its 2019-2020 season of Music by the River, a series of concerts hosted at and supported by the Cathedral. Music by the River seeks to bring the finest musical artists and ensembles to perform at the historic Cathedral. The first concert, “Alex and Friends,” featured a variety of music from the 1920’s. Alex Ashman, director of music at St. Stephen’s, directed and emceed the program, which featured piano, vocal solos and duets, and a barbershop quartet. Audience members heard favorites such as “I Got Rhythm,” “Embraceable You,” “Stardust,” and “Charleston.” Musicians from around the Harrisburg area performed in the concert. Many were Messiah College graduates, and some are active in the cathedral. Musicians included Douglas Beach, Alex Cooper, James Isley, Madeleine Larrimore, Faith Neece, Chloe Selles, Kate Wilding, and Taylor Made Barbershop Quartet.

The next Music by the River performance will feature the Hershey Hand Bell Ensemble on Friday, December 13th at 7:30 pm.

Find out more about Music by the River at http://www.musicbytheriver.org/#schedule