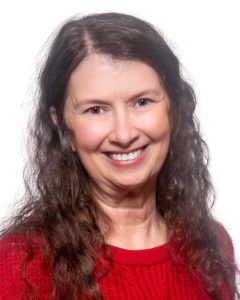 Marilyn Pyeatt (2022)
Marilyn Pyeatt, along with husband, Woody, and younger son, Nathaniel, joined St. Luke’s Altoona after moving to Blair County from Dallas, Texas, in August of 2016, to be closer to their elder son, Nick, and his family.  She and Woody were raised as Presbyterians, but in high school, Marilyn felt a strong need for a different worship style that would help her grow closer to God, which she found in the Episcopal Church. They were both confirmed in 1978 in Parkersburg, West Virginia, one of a number of places they have lived to pursue their mutual love of theatre. Currently, they are working together to produce plays in St. Luke’s Auditorium, embracing the opportunity to use their gifts to raise money for the parish and provide a creative way to show God’s love. Marilyn also enjoys writing and adapting plays, watching indoor soccer, playing word games, and especially spending time with her grandchildren, Gavin and Josephine. 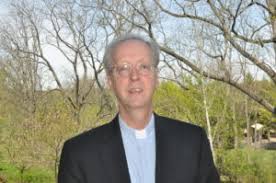 John Harwood came to St. Mark’s-Lewistown on Pentecost, 2017, after spending seven years serving Trinity Episcopal Church and Zion’s Evangelical Lutheran Church in Renovo, Pennsylvania.  In Lewistown, he serves on the advisory boards for the Mifflin-Juniata Agency on Agency, the Shelter Services, and the Lumina Center. He currently chairs the Diocesan Evangelism committee and has served on the Standing Committee. 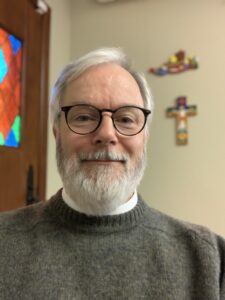 Greg Welin came to serve Mount Calvary Church in Camp Hill in 2017. He began his ministry here as his wife, Amy Welin began her work as Dean of St. Stephen’s Cathedral in Harrisburg. Most of his ministry has been in Connecticut where he was ordained in 1992. He has had much experience as an interim priest and priest-in-charge, serving churches working through significant issues before starting a search process for a permanent rector. He has served on the standing committee in Connecticut and serves on the standing committee in this diocese at present.

Greg also works with the Diocesan Migration Ministries Resource group. He is active in a group from Christian Churches United called RUAC, the Race and Unity Action Coalition. They gather for discussions about race and diversity with churches in Harrisburg and churches on the west shore of the Susquehanna. 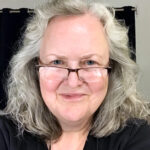 Kathy T. Hettinga is a Postulant for Holy Orders for the priesthood in the Diocese of Central, PA. She is an award-winning book artist, photographer, author and designer with a BFA from Calvin College and an MFA from Colorado State University. A teacher and the first woman to be named Distinguish Professor of Art and Design, she taught at Messiah University, Indiana Purdue University, Colorado State, as well as for IMAGE in Santa Fe. Long interested in Theology and the Arts she taught at Wesley Theological Seminary, and as Research Fellow at the Institute of Sacred Music, Worship and the Arts at Yale Divinity School, where she exhibited her work, sang in the Marquand Chapel choir, took many courses and offered critiques in type/graphic design courses. She designed the SEEN Journal for Christians in the Visual Arts for over a decade, and is Design Consultant for POWER Interfaith.

Kathy chairs the Adult Formation and Spiritual Growth Ministry at St. Luke’s Episcopal Church in Mechanicsburg where she is in the choir, and served as Senior Warden, Junior Warden and as a delegate to Convention. She is serving on the Standing Committee. Most recently she is serving on the SSFM task force for Communications and Marketing, and offered the pastoral voice for CIVA Gathers. She is married to Nathan Sooy and together they have three sons. Kathy loves learning, the people of God both inside and outside of the Church, the Scriptures, and participating in the life of SSFM. 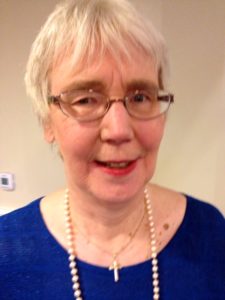 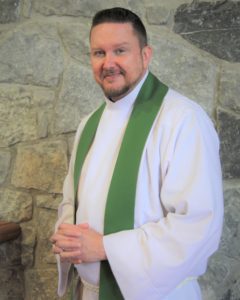 Prior to being called by St. Edward’s, Father Rick had been serving as Associate Rector at St. James in Lancaster since June of 2018. As part of his ministry there, he has worked hard to lift up ministries in our community that promote the dignity of all people and has developed strong relationships with clergywomen and men in our convocation and diocese.

Rick will soon finish coursework for a Doctor of Ministry in Christian Leadership from Duke Divinity School.  As a student there, he has honed the craft of ministry with work in parish administration, strategic planning, multi-media practices, preaching in politically diverse contexts, and outreach ministries.  In addition to his nearly completed doctorate, Rick holds a Master of Divinity from Virginia Theological Seminary; a Master of Arts in Religious Studies from Florida International University; and a B.S. in Legal Studies from Nova Southeastern University.

An accomplished musician (vocalist, guitarist, bassist, and keyboardist) Father Rick self-recorded and produced 9 full-length C.D.’s. and maintained a full-time performance schedule with “the Rick Bauer Band.”  Through his Roads to Rome Productions in Hollywood, Florida, he served for 15 years as an ordained non-denominational minister, proprietor, performer, booking agent, and producer.

Father Rick’s many academic awards during his years at Virginia Theological Seminary include an award for Christian Leadership, a Biblical Language Prize, an Award and Scholarship for Academic Excellence in Theology, a Scholarship for Academic Excellence and another for Theological Reflection, and a Doctoral Fellowship for Study: Catholic University, PhD. Religion and Culture.  Rick was a Florida Academic Scholar, 1993-1997 and completed his undergraduate education on a full academic scholarship.

Janis and her husband, Wayne, live in Mansfield, PA.  They have three grown sons, Wayne (Becky), James and Bradford (Michelle), and two grandchildren, Madison and William. 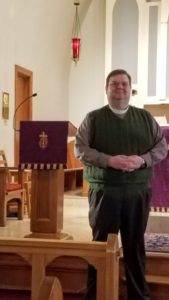 The Rev. Grant Ambrose (2023)
The gifts and skills I bring to the Diocese of Central Pennsylvania and this ministry include that I grew up in a very rural area of Eastern North Carolina in a yoked ministry of four Episcopal congregations and can relate to small-church life. As a priest, I served St. Mary’s, Arlington, VA, a large suburban parish. I bring a passion for listening to all voices and not rushing in to something “already knowing” the way forward. I bring a calm presence that encourages conversation. I bring a love of Jesus Christ that seeks to keep the faith and essential parts of our rich tradition relevant to today’s realities. 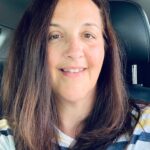 I have lived most of my life within the borders of the Diocese of Central Pennsylvania, attending churches in the Northern and Southern Tier of the Diocese (and many in between). As a member of St. Mary’s Waynesboro, I’ve served in enough roles to develop skills required to evaluate needs and strengths, to plan events, to lead functional tasks and educational opportunities, and to develop meaningful relationships. My career and my involvement in my community have allowed me to develop skills need to network, create plans for improvement, and support individuals, as well as, programs in their journeys toward sustainability. 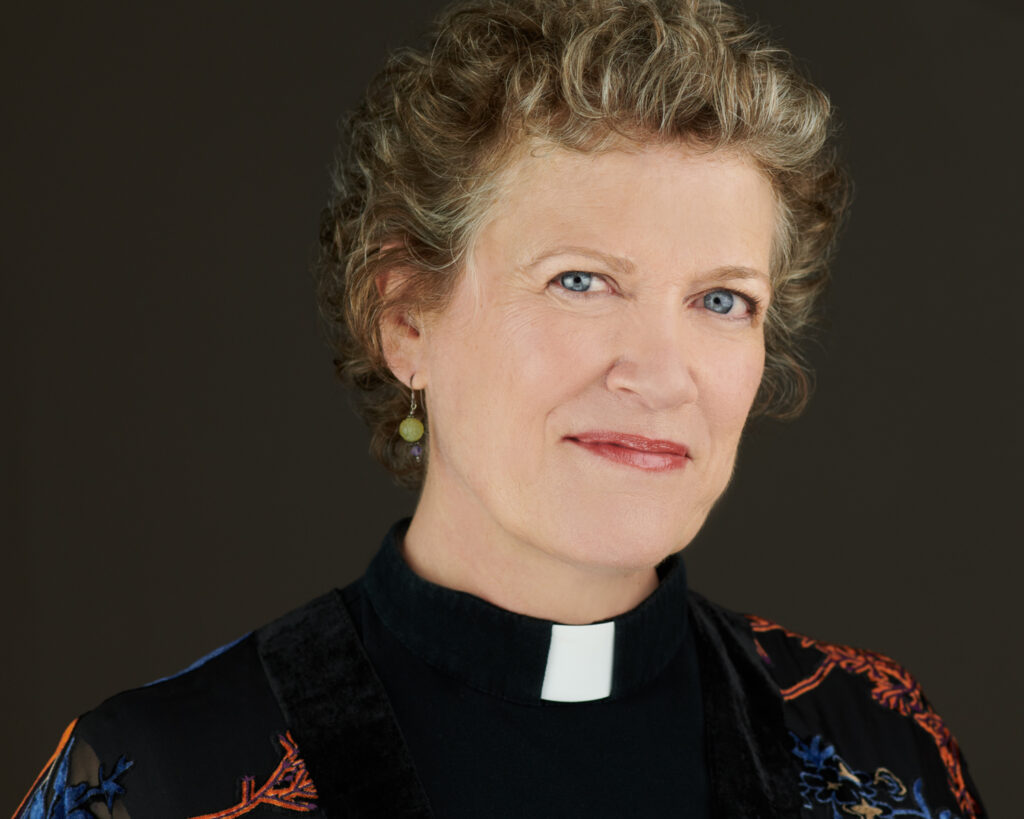 The Rev. Sarah Weedon (2022)
The Rev. Sarah L Weedon received her M.Div in 2015 from the School of Theology, University of the South. She also has a MS in Spiritual Direction from Neumann College (Aston, PA). Rev. Weedon is a Labyrinth Facilitator with her own canvas Labyrinth that she uses for retreats and workshops.

Rev. Weedon was Priest-in-Charge of St Stephen’s in Mount Carmel and Holy Trinity in Shamokin from 2015 to 2017, assisting with the process that led to the closing of the church in Shamokin and the opening of the new Episcopal Mission of the Church of the Resurrection in Mount Carmel. She is currently Rector of St Andrew’s, Lewisburg.

She served the diocese on the Standing Committee to fill out a vacancy in 2016. Rev. Weedon is currently the Convenor of the Susquehanna Convocation and is serving on the Commission on Ministry, the Diocesan Anti-Racism Commission, and the Council of Trustees.

Rev. Weedon takes sacred time at her beloved Eagles Mere home with her partner Jack Simonds and enjoys reading and needlepoint. She has three children – Amanda (Mike), Alex, and Susannah (James) and loves spending time with her two grandchildren when she can.

The Rev. Kyle Murphy (2021)
I am a Pennsylvania boy at heart. I was born and raised in Scranton, graduated from Lock Haven University in 2006 and moved to Williamsport that same year.  I did my undergraduate work in Secondary Education and have taught high school French for nine years.

Currently, I serve as the Lay Pastor at Christ Episcopal Church. I am a candidate preparing for ordination to the Priesthood through the Stevenson School. I am humbled and grateful to serve in these capacities and work together to build the Kingdom of God in our diocese.